A Thousand Plateaus and Philosophy (with Jeffrey A. Bell and James Williams)

While Deleuze considered his later collaborations with Guattari to surpass his earlier sole authored works, the reception of Deleuze’s thought in the Anglo-American philosophical world has been almost exclusively in terms of his early work. A Thousand Plateaus and Philosophy will bring a renewed focus on the philosophical significance of Deleuze and Guattari’s later work bring bringing together some of the leading scholars of it to collaboratively develop a close reading of their most important work: A Thousand Plateaus. Each contributor addresses a different plateau, relating Deleuze and Guattari’s own text to their own specific philosophical interests. The collection will combine the virtues of an introduction to the work with deep scholarship from those at the forefront of research on Deleuze and Guattari. You can read the introduction here.

The Cambridge Companion to Deleuze (with Daniel Smith) 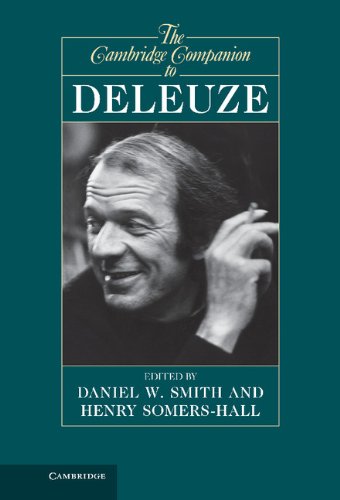 Gilles Deleuze (1925–95) was an influential and provocative twentieth-century thinker who developed and presented an alternative to the image of thought found in traditional philosophy. This volume offers an extensive survey of Deleuze’s philosophy by some of his most influential interpreters. The essays give lucid accounts of the fundamental themes of his metaphysical work and its ethical and political implications. They clearly situate his thinking within the philosophical tradition, with detailed studies of his engagements with phenomenology, post-Kantianism and the sciences, and also his interventions in the arts. As well as offering new research on established areas of Deleuze scholarship, several essays address key themes that have not previously been given the attention they deserve in the English-speaking world.

When students read Difference and Repetition for the first time, they face two main hurdles: the wide range of sources that Deleuze draws upon and his dense writing style. This Edinburgh Philosophical Guide helps students to negotiate these hurdles, taking them through the text step by step. It situates Deleuze within Continental philosophy more broadly and explains why he develops his philosophy in his unique way. Seasoned Deleuzians will also be interested in Somers-Hall’s novel interpretation of ‘Difference and Repetition’. You can read the first chapter here.

Hegel, Deleuze, and the Critique of Representation

Essay on Transcendental Philosophy presents the first English translation of Salomon Maimon’s principal work, originally published in Berlin in 1790. In this book, Maimon seeks to further the revolution in philosophy wrought by Kant’s Critique of Pure Reason by establishing a new foundation for transcendental philosophy in the idea of difference. Kant judged Maimon to be his most profound critic, and the Essay went on to have a decisive influence on the course of post-Kantian German Idealism. A more recent admirer was Gilles Deleuze who drew on Maimon’s Essay in constructing his own philosophy of difference. This long-overdue translation makes Maimon’s brilliant analysis and criticism of Kant’s philosophy accessible to an English readership for the first time. The text includes a comprehensive introduction, a glossary, translators’ notes, a bibliography of writings on Maimon and an index. It also includes translations of correspondence between Maimon and Kant and a letter Maimon wrote to a Berlin journal clarifying the philosophical position of the essay, all of which bring the book’s context alive for the modern reader.